This page lists up to the first three Australian generations, although details have been abbreviated for the third generation.

***  Email addresses on this page have been 'munged' to prevent them being harvested by spammers. If, when you click on a name in the eddress column, your email program fails or doesn't open, or the address isn't pre-filled, click here for more details. 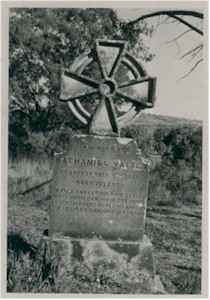 1. Sabina Vaisey was christened on 23 March 1800 at Kingswood, Gloucs.

2. Mary Ann Vaisey was christened on 14 February 1802 at Kingswood, Gloucs.

3. Betty Gazard Vaisey was christened on 5 July 1804 at Kingswood, Gloucs.

4. John Vaisey was christened on 6 April 1806 at Kingswood, Gloucs.

5. Nathaniel Vaisey was baptized on 29 January 1809 at Kingswood, Gloucs, Eng. He married Hannah (Ann) Ballard, daughter of James Ballard and Hannah Sargeant, before 1835. He immigrated on 5 September 1839 to Sydney, per Bussorah Merchant with Hannah and his family. He died on 11 September 1885 at Merriwa, NSW, at age 76. He and his family lived around Hinton and on the Patterson River before he moved to Meriwa late in life. Hannah is buried in the cemetery at Hinton, Nathaniel at Merriwa.

This branch is being researched by Jennifer.

b) Hannah Ballard Vaisey was born on 27 April 1835 at Wiltshire/Gloucestershire. She married William Manning on 3 February 1852 Wesleyan Church, Maitland and died in 1899 at Balmain, NSW.

This branch is being researched by Judy.

This branch is being researched by Corinne.

(1) Ethel Fanny Beatrice Vaisey married John Jones and later a Patterson. She was born on 21 July 1872 at Merriwa, NSW.

(7) Verena Emily May Vaisey was born on 4 December 1889 at West Maitland, NSW. She married Ralph Gettings Johnston, son of Peter Johnston and Catherine Elizabeth Gettings, on 31 December 1919 at New Lambton, NSW. She died on 26 July 1956 at Boolaroo, NSW.

This branch is being researched by Linda Barraclough

(1) Zenas Nathanial Vaisey was born in 1879 at Raymond Terrace.

(2) Andrew William Vaisey was born in 1880 at Hunter River, Newcastle.

6. Orlando Vaisey was christened on 29 January 1809 at Kingswood, Gloucs., England. He married Harriet Smith on 26 February 1839 at St Nicholas, Gloucester, Glos., England and died on 12 December 1879 at Clarence Town, NSW, Australia, at age 70. The family arrived at Port Adelaide per the Gomelza in 1856.

a) Mary Smith Vaisey born circa 1840. One Daughter of Orlando Vaisey married an R.J. Banks.

b) Eliza Vaisey born circa 1846. One daughter of Orlando Vaisey married an R.J. Banks.

Many people have helped to contribute to this listing over the years, so it is not possible to acknowledge each here.

This chart has more recently been updated by Judy Carter-Smith and Corinne Thompson, whose assistance is much appreciated. Further updates are sought, and those who do supply information will, unless they wish otherwise, be acknowledged here.

To add further names to this page, or have yourself listed here as a researcher Email Linda

Back to Vaisey Summary Page