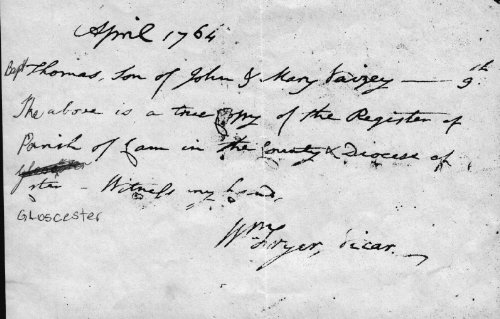 The certificate from the Bible. The words "Bapt" and "Gloscester" have been added to the photocopy in pen.

Garbage the Key to Historic Treasures

Under the swollen mounds of garbage at the Redhead tip lurk some interesting 'finds'. And the tip's only licenced scavenger, Mr Ray Rowe, of Charlestown, is always on their trail. His most recent finds include a leather-bound Bible containing a birth certificate dated April 1764. The certificate relates to one Thomas, son of John and Mary Vaizey.

It also contains a description of the Bible written on a slip of cardboard describing it as 'Old Bible. Owned by Mr N. Vaisey. It was bought by his great-grandfather in 1806 and has been in the family for 155 years'. It goes on to add that the discolouration of pages in the Bible was caused by the 'heavy floods on the Hunter River in the 70s of last century when the family home at Hinton was flooded out'.

The Bible had been printed at Liverpool in England in 1806.

Mr Rowe associated the Bible with the family that possibly started the township of Vacy, near Paterson. 'You're really looking at history there I'd say', he said.

Mr Rowe said that he had bought the salvage rights to the tip about five years ago and while historical relics were interesting, it was recyclable materials that yeilded his income. His business had been hit hard recently by a decline in prices for recyclable materials, such as aluminium, brass, copper, batteries and building materials

A decision by the Lake Macquarie City Council to re-route heavy trucks (over 2 tonnes) from the Redhead to Awaba tip, depriving him of their materials, had also added to his difficulties.

Mr Rowe said that he planned to retire when the tip closed in another 12 months. 'I'll hang my feet up', he said.

A former Newcastle woman believes than a 186-year-old leather-bound Bible found dumped amid mounds of garbage at Redhead tiup recently was probably stolen from her family's home at Mayfield about 23 years ago. Mrs Allison Johnson, now of Young, NSW, said that while she was revisiting the Hunter a relative alerted her to a Newscastle Herald story published on July 4. That yarn was about .......[the first article is then summarised] ...... Mrs Johnson said she had alerted her mother, Mrs Margaret Jones, also living in Young, and thought that they should seek the return of the Bible, The Herald then contacted Mrs Rowe, who said the Bible had been sold for $1100 to an unknown Sydney buyer. 'He (Ray) had 49 calls from people (after the Herald article), several of whom claimed to be the "original" owners or relatives', she said.

[Note: another member of the Vaisey family, who contacted Mr Rowe quite early on the morning in question was told he had sold the Bible, plus other items, for $80 - Linda]

[The article is headed with a photograph of "Mrs Johnson, who alerted her mother about the Bible"]

From Young, where she helps run a motel, Mrs Jones told Topics that the 'N. Vaisey' mentioned would be her grandfather, Nathan. 'And my middle name is Vaasiey too,' she said. 'Originally, it was French and spelled Boisey. The family Bible was stolen along with my Beatles record collection when my mother was moving up to Mallabula and her Kerr Street, Mayfield, home was empty. It was an odd collection to steal. My mother reported it to the police, but she's been dead for about five years now.' Mrs Jones did not know what proof, if any, she could now supply to prove that the Bible was her missing one.